As we mark Autism Awareness — Acceptance! — Month this April, we’d like to take a few minutes to reflect on what it means. Whether your child is only recently diagnosed and you’re new to the autism community, or whether you’ve been a part of the community for a long time, you’ve probably noticed there’s not a lot of agreement among the larger community about how to talk about, support, and represent autism. Some groups embrace the puzzle piece to raise awareness; others feel the puzzle piece is an outdated and misguided representation of what autism means. Still others feel that the idea of raising “awareness” doesn’t go nearly far enough toward acceptance: true inclusion of people with autism in general education, the workforce, and beyond.

To help us navigate these questions, we reached out to Kim Sinclair, parent and executive director of the Autism Society of Los Angeles (ASLA), and artist and self-advocate Rachel Kopito.

(A bit of backstory: the Autism Society is a national organization, but each local chapter raises its own funding and initiatives in response to the needs of their community. In LA, the focus is on education. Sinclair tells us that ASLA partners with self-advocates like Rachel Kopito to educate different groups in the public sector, including and especially medical professionals and LAPD’s Mental Evaluation Unit — to date, they’ve trained over 7,000 officers.)

As Kassiane S. writes on the Autistic Self Advocacy Network (ASAN), “I often say awareness is the No Child Left Behind of advocacy. It’s a start, but [by] no means a finishing point we should be satisfied with.”

And it’s true: awareness — or knowledge and understanding — are essential first steps, especially for parents of young children who are learning to embrace a diagnosis they may not have known much about before their child was born. For parents, coming to disability through love is a kind of grace in its way. But as any parent will tell you, it’s not enough to simply understand. What matters to us is that our kids belong — and to belong, people have to be accepted for who they are.

Kim Sinclair points out that acceptance is, pure and simple, about inclusion. “You can be aware of autism, but whether you take the next step and accept it, and include those individuals in the education setting and the workplace setting — that’s what makes the difference. Acceptance is the mindset that provides inclusion, and that’s where, as a society, we need to be shifting our focus.” And that is exactly why so many autistic self-advocates and the organizations that champion and support people with autism are moving away from the term “autism awareness” to “autism acceptance.”

Rachel Kopito, who speaks as a self-advocate at ASLA’s trainings and events (and who recently graduated from Loyola Marymount with honors, and is a tremendous artist, to boot), tells us, “It’s really a small word change, but it means a lot in terms of the idea. It’s not really enough to be aware; that doesn’t spur any change toward helping that person live a fulfilling life or helping them get accommodations that they need in order to live that life.”

The Trouble with the Puzzle Piece

“A lot of the community do not agree with the concept of a piece of them being missing,” Sinclair says — but of course, as with any symbol, what this translates to isn’t universal. If you spend even a few minutes reading about it online, it’s easy to see the variety of opinions and interpretations. Debra Muzikar, who writes about the puzzle piece debate on The Art of Autism, did an informal survey of the symbol on Facebook and received over 100 responses. She quotes one parent, Keri Bowers, who writes, “I believe my son is a mystery — still, after almost 26 years, and he is ‘missing’ certain understandings, skills, and abilities as an ‘autistic person.’ He would tell you — as he told a group of volunteers at a training he helped me facilitate yesterday, ‘I just don’t get certain things.’ Is it insulting to imply through imagery a particular truth about him?”

Another mom writes, “Perhaps to some, it’s a ‘missing’ piece. I’d like to think our kiddos are the COMPLETING PIECE of the human puzzle.” Autism sexuality advocate Amy Gravino agrees: “I would have fewer reservations about the puzzle piece logo if there were a way to re-imagine the meaning behind it. So rather than it representing a missing piece in individuals on the autism spectrum, I would love for it to represent the ‘key’ piece . . . as the piece that completes it.” 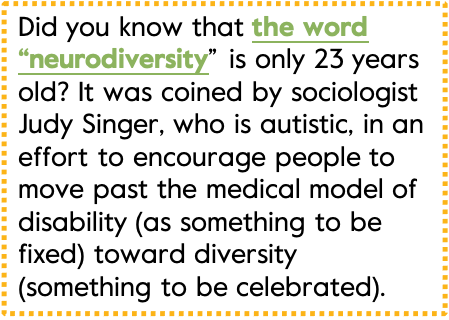 The puzzle piece has become so loaded that it’s difficult for people with autism to see it independent of its history, which is essentially an ableist one. So, what other symbols are out there that promote acceptance and the celebration of neurodiversity? As Cassandra Crosman writes on In the Loop About Neurodiversity, “If you want to use a more positive symbol for autism in April or any month of the year, use the symbol for autism acceptance rather than awareness, or that of neurodiversity (the rainbow infinity loop, or the gold infinity loop for autism acceptance). . . . The color gold is from the periodic element ‘Au,’ which is shorthand for autism, and some autistic people choose to go “gold” for autism instead of participating in Autism Speaks’ ‘Light it Up Blue’ campaign. Other autistic people may choose the color red or participate in the social media campaign #RedInstead. . . . Some autistic people use crimson gold, combining the red and gold colors used for autism acceptance.”

How Can We Best Support and Celebrate Our Kids?

As parents, we know that what often keeps us rooted and supported in this life are the communities we build around our families — not only other parents on similar journeys, but (as Kim Sinclair stresses) those parents and mentors who are a few steps ahead of us and can help us along. And this is equally important for our kids.

Kopito says that when she was growing up, her family “made all these connections with other families who had children on the spectrum, and they were all different and all manifested in different ways, but we sort of formed a little community, so we would help each other.” While this erstwhile community helped her mom in particular, Kopito says, “it helped me as well, growing up and meeting all these other kids like me — it gave me a whole bunch of experiences, and I still draw on those experiences.” 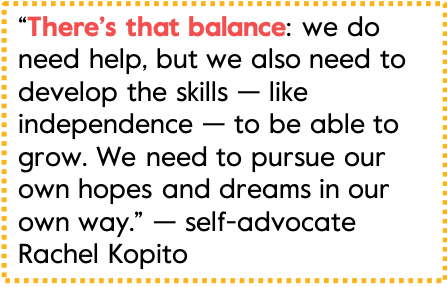 In thinking back to what her own parents did to support her in school, Kopito tells us that even though she sometimes wasn’t sure why she was having a hard time and wasn’t able to articulate exactly what wasn’t working, her parents listened and advocated for better accommodations and different placement, and that made all the difference. “When things get bad, something has to change, because the environment you’re in is not allowing you to grow into your best self,” she says. “It really takes advocating for your children and then teaching them to advocate for themselves.”

And that is, perhaps, the key: teaching our kids to listen to, understand, and respect themselves, especially the parts that are sometimes difficult for them to accept. Talking with Kopito really brings this home. “When I was a kid,” she tells us, “I could sometimes tell that it was harder for me to make friends, and there were some people who didn’t want to hang out with me as much. But I did embrace it because I knew I’m different but it’s not really a bad thing — that was definitely something I was taught growing up. Mom and Dad made sure to tell all these stories about being different, and that made me feel more comfortable with myself I guess, and I kind of figured out how to find a place of comfort on my own. There were times that I really struggled, but other times where I did manage to find groups of people I could relate to growing up. And a lot of times, I was just content to be by myself because I liked to be alone and let my imagination go wild and do artwork — and that was something I’ve held onto.”

Stay tuned for a deeper look at how we can teach our kids about accepting their disabilities and how to advocate for themselves. And a huge thanks to Rachel Kopito for sharing her perspective and experiences with us!

Want to go to a fab drive-in movie event in Redondo Beach this weekend celebrating autism acceptance and neurodiversity? Get your tickets here!